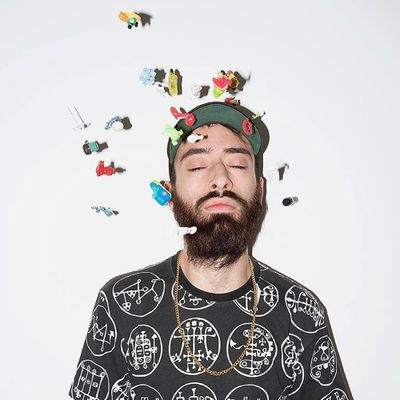 Italy, Bologna
Luca Albino aka Capibara, roman producer, born in 1989, belongs to the big names of the Italian electronic scene.
A sensitive soul, finds refuge behind songs in which, beyond the mirror of an electronics dressed in garage futurism, urban rhythms and afro suggestions, hide pop lines and horizons. Founder of 12 Inch Plastic Toys from the Roman independent electronic music label White Forest Records.

From the beginning of his musical career, Capibra has always shown a unique vision, combining future-oriented rhythmic impulses with a very personal experimental pop sensibility.

"Roxanne" and "Felina" are his first EP, out in 2013. Applauded by aficionados and numerous blogs and industry publications, he began to build a solid background around the clubs.

In 2018 he released his album "Omnia". A record in which his solid hip-hop roots meet techno, dancehall rhythms and reggaeton. "OMNIA" comes from the idea that man is the result of the environment in which he lives. Each of us is the result of where he was born, where and with whom he grew up: the passive environment (what is imposed by birth, school, work) and the active environment (the one in which the individual actively chooses to participate)We grow up with this contrast between the things we choose and the things we find ourselves in.

In 2021, "Homunculus"was released . A record full of contradictions and jarring. An album influenced by pop, metal, j-pop and English dance of the early '00, through experimental soundtracks and pure electronics.