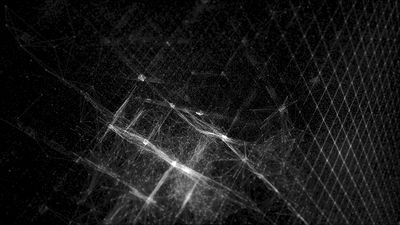 venerdì, 24 settembre 2021 | 22:00 > 22:45 2021-09-24T22:00:00.000Z | Room 1
Capillaries Capillaries is an audiovisual composition based on a non-hierarchical and bi-directional relationship between sound and image in real-time. The piece does not represent a visualisation of music or sonification of an image but rather a tangle of audiovisual interactions.
The work explores the idea of an audio-visual-time object where shape, time and sound interact with one another. The main focus of the piece are the structures that emerge from the force field that pulls such object towards two opposite extremes - tidy precomposed order or generative chaos. The situation reflects the id-ego-superego model which represents the conceptual background. Just as the ego is established in-between the two groups of conflicting forces that constitute, distort, constraint or disperse our subjectivity, so too is the material of Capillaries Capillaries.
Throughout the piece we observe the behaviour of one and the same material from different perspectives.

Singing Sand was inspired by the sonic potential of abstract 3D computer graphics. The central element of the composition is a physics-based visual material whose movement is sonified in real-time. The piece explores what various particle fluctuations, tensions or shape-morphings sound like, what internal rhythms they create and how that affects our perception of the visuals in return.
Grains of sand resembling visual particles are sonified by mapping their individual velocities to various parameters of individual grains inside a custom-made granular synthesizer. At the same time the velocities determine colours of the particles which together creates a spectrum of colours and sounds. This results in perceptually tight audiovisual bonds that are at times deliberately loosened as the composition exploits the whole spectrum of relationships between sound and image as compositional parameter.
The central aim behind the piece was to explore how such audiovisual material could function in a free audiovisual paradigm and also how to meaningfully force it onto the grid of harmony and metric rhythm. In the latter case the material created liquid grooves on top of dub-tech influenced fixed rhythmic elements, as well as ever changing spectral swirls that emerged from cross-breeding an originally noisy and non-stable sound source with pitch-based material.
The piece represents an attempt to compose from within an audiovisual paradigm where most of the compositional decisions came as a consequence of cross-fertilisation between both modalities.