News
[Testo disponibile solo in inglese] Technarte, TEA (Tenerife Espacio de las Artes) and ITER (Instituto Tecnológico y de Energías Renovables), in order to investigate the connections between Innovation, Art, Science and Technology in creative processes, decide to launch a program of artistic residencies in scientific environments in the Island of Tenerife called Technarte Residency Tenerife. The goal of this program is the creation of two artistic projects that integrate the fields of technology, science and innovation into their reflexion, production and execution processes.

From the organization of the program, it is considered that the convergence of artistic creation and scientific practice constitutes a suitable tool to activate processes of social development - since the creative relationship between art and technology can favor the dissemination among the citizens of its particular advances. Thus launching the call two residencies in a scientific environment of Tenerife, which aim to provide a favorable context for artistic production through interaction with an environment that seeks the direct relationship between art and technology. These residencies will take place in the ITER Bioclimatic Houses (casas.iter.es) on the Island of Tenerife1, where ITER has world-class technological assets. This call will facilitate the coexistence between resident artists and scientists who regularly work at ITER, a technological, inspiring and stimulating environment. 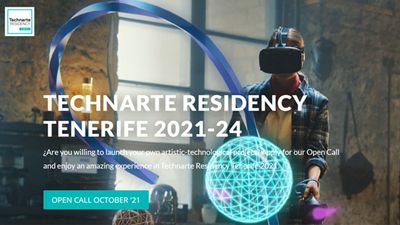