News
[Testo disponibile solo in inglese] Open call for Artist-in-Residence-Entries for the upcoming 3rd edition of FMR – Festival for art in digital contexts and public spaces which will take place in Linz, Austria, from June 6 to 11, 2023.

FMR – art in digital contexts and public spaces is a biennial festival for artistic processes and positions, that reflects the ephemeral nature of our digital and connected present. The ever-advancing digitalization of everyday life implies an intense overlapping and layering of familiar physical, but also finely interwoven digital spaces. FMR focuses on the shifts, distortions and rifts that arise in this process and presents current artistic positions in this context.

The festival, whose title alludes to ephemerality and short-livedness, presents works whose initial ideas can be found in virtual and/or digital space or have a strong reference to it, but are shown (sometimes in a transformed way) in the physical surroundings of the city of Linz. The focus is primarily on the interstices that arise during these transformations into public space – outside of museums, galleries or art spaces. At the same time, FMR attempts to subject the concept of sculpture to a contemporary update and to reflect on questions of transience, ephemerality and obviousness.

The upcoming 3rd edition of the festival focusses on five different topics #ephemeralization, #blackout, #circularity, #cooling and #decoupling. To deal with all these topics more intensively, we are inviting artists and art collectives to spend one month creating a new work, or further developing an existing project. Openness to the mission of the festival as outlined above as to the topics as outlined below and interest and readiness to work together with the team of FMR are naturally preconditions. During the residency, we will provide space, resources and facilities for productive experimentation, dialogue, and collaboration. The work developed/realized during the residency will be presented within the framework of the festival (depending on the format either as part of the group exhibition, performance, or another mode of presentation) and complemented by discursive formats. The artists will also be given the option to be part of an artist talk.

FMR 23 will take place at the southern harbor district of Linz. Between the former Quelle department stores’ in the northwest, the Danube in the east, the tank terminal in the south and the LINZ AG district heating power station in the southeast, an area of more than 100 hectares is spread out, which is characterized in a fascinating way by the alternation between industry and nature. Here you will find a lot of different companies such as Plasser & Theurer, Schachermayer, BUNZL & BIACH, KE KELIT, PORR Bau or Fischer Brot. At the same time, the area is bordered and criss-crossed by natural, recreational and leisure spaces, including the hello yellow Velodrom, the Flachenauer farm, the Hollabererhof with Schwemmland and the allotment garden settlement of Linz-Ost, which alone covers around 10 hectares.

These are the most important dates for your application: 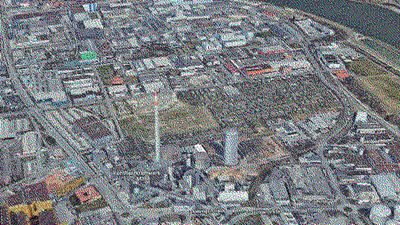